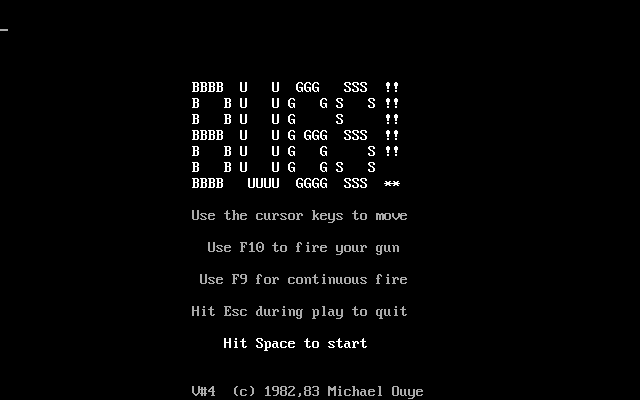 Bugs! is a free, text-mode clone of Centipede written in Pascal (some versions include the source). A horde of insects is invading, and the only cure is an inexhaustible supply of ASCII arrows, fired from a gun that can be moved throughout a narrow band at the bottom of the playfield.

An assortment of nasty bugs infests the mushroom-littered field: the segmented centipede, which descends from the top, and whose path depends on the placement of mushrooms; the spider, bouncing along the bottom and consuming the scattered fungi; the flea, which drops by to deposit new growths; and the scorpion, which poisons any mushroom in its path. Mushrooms may be used as cover, or shot away to control enemy movement and clear a line of fire. When poisoned, they'll knock the centipede segments down towards the bottom.

Bugs! differs from the original by modifying some details of enemy behavior, but mainly by giving the player only a single life: one close encounter with a bug spells the end of our brave exterminator.